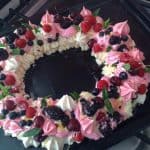 Fruit Pavlova. ( makes 1 large Pavlova ) + extra small meringues for top
300 g icing sugar sifted
300 g castor sugar
300 g egg whites … This equals to 6 egg or 7 egg whites depending on size. I used jumbo eggs so it was 6 egg whites.
Beat whites in your stand mixer until thin cords start to form. Slowly add scoop for scoop your castor sugar. Setting should be on low until all incorporated about 4 to 5 mins. Then with a spatula, stir in the icing sugar well. Rub the meringue between your fingers it should be smooth, and glossy and not grainy. Place In Piping bag with a star nozzle no. 867 from baking tin in Ottery. Then pipe swirls in a round circle on parchment paper the size of a dinnerplate. Pipe some extra small meringues in white then colour your egg whites with a drop if Crimson food colouring and pipe some small pink meringues, bake in slow oven 85 C for 2 hours. Turn off oven heat and leave in oven overnight.
Whip 250 fresh cream until stiff. Whip 1 pkt x 199 g Woolworths marshmallow frosting mix according to directions. I added 1 tsp strawberry essence and a drop of pink Crimson coloring to make pink. Place both whipped cream and whipped marshmallow frosting in separate piping bags add them both into a larger ziplock bag, cut the corner and pipe swirls around the pavlova . It will come out as two colors. Decorate with fresh red currants, cherries, blackberries and blueberries. Add a few sprigs of mint and a drizzle of granadilla pulp to top. Add your smaller meringues for decoration. Lastly add sifted icing sugar ( optional )

Tried and Tested and posted by: Gail Haselsteiner‎ 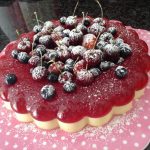 For the jelly, start by soaking the gelatine leaves in cold water for 5 -8 minutes. In the meanwhile, heat 250ml of the Grapetizer, castor sugar and lemon juice in a saucepan. Bring up to the boil and stir until the sugar is completely dissolved. Remove from the heat. Squeeze excess water out of the gelatine and add to the hot grape juice. Stir through until the gelatine is completely dissolved. Set aside to cool for about 10 minutes. Add the remaining 250ml Grapetizer and liqueur to the warm juice and stir through gently to retain some of the bubbles. Pour into a mould and refrigerate until set.
To make the pannacotta, soften the gelatine as per above. In a saucepan, heat together the cream, vanilla seeds and castor sugar. Bring the mixture up to the boil. Remove from the heat. Gently squeeze the excess water from the softened gelatine and add to the hot cream. Whisk the mixture until the gelatine is completely dissolved. Set the cream aside to cool for at about 20 minutes before pouring over the set jellies. Refrigerate for 3-4 hours or overnight.
To serve, un-mould by dipping into boiling water. Invert onto a serving platter and decorate with frosted berries.

Source : Bibis Kitchen at 36
TRIED AND TESTED and Posted by: Gail Haselsteiner 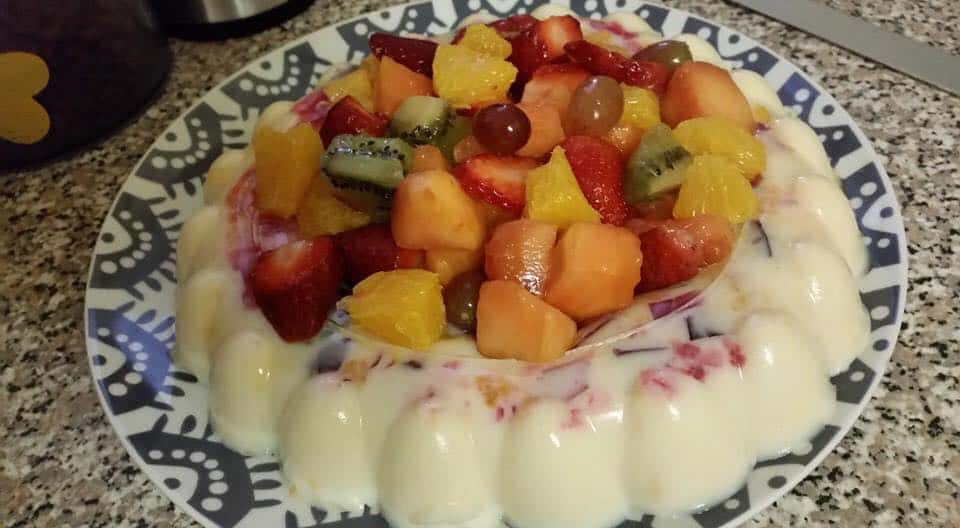 Dissolve 4 pkts of different coloured jellies separately in bowls with 1 cup boiling water each. Stir until dissolved. Put bowls in fridge to set completely. When jelly is set cut up into cubes and fill your Tupperware jello mould which has been sprayed with spray and cook. Take 2 satchets of gelatin ( Sheridans brand ) and dissolve in 1/2 cup cold water. Stir until it becomes spongy. Now add 1 1/2 cups boiling water and stir well. Add 1 can condensed milk to the gelatin mixture and let it cool completely. Once cooled pour gently over your cubed jelly pieces and place in fridge until set. This took 3 hours depending on your fridge temp. Served with fresh fruit salad and cream or ice cream.

Tried and Tested and Posted by: Gail Haselsteiner 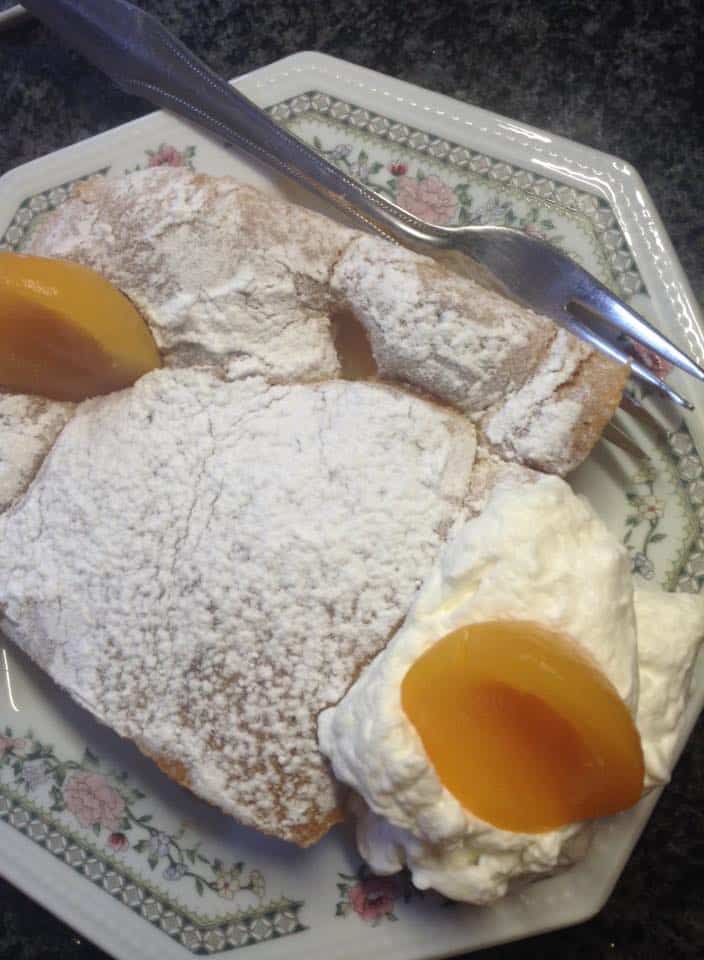 Beat egg whites in a mixing bowl until nice and stiff
In another mixing bowl with an electric beater beat egg yolks and sugar until smooth and frothy. About 3 mins. Add V. Essence, salt, sifted flour and baking powder. Add water and mix until batter is smooth then lastly add the oil. Beat another minute. Fold in egg whites with a spatula. Pour into baking dish and place your apricot halves into the batter, bake for 40 to 45 mins or until a skewer comes out clean. Once cooled, dredge with icing sugar, serve with whipped cream or vanilla ice cream.
You may substitute with any canned fruit such as peaches, pears or tin apples

Tried and tested and Posted by: Gail Haselsteiner 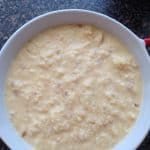 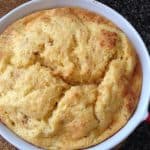 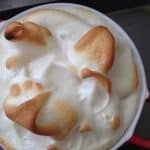 Preheat the oven to 180*C/350*F. Generously butter a 1 1/2 pint glass baking dish. Set aside.
Place the milk along with the lemon rind and bring just to the boiling point over medium heat. Remove from the heat and stir in the breadcrumbs and 1 ounce of the sugar. Set aside to infuse for +_20 minutes.
Separate the eggs, putting the whites into a clean glass bowl, free from any grease. Beat the yolks and then beat them into the breadcrumb mixture. Pour this bread custard into the prepared baking dish, spreading it out evenly. Bake in the centre of the oven for 30 to 35 minutes, or just until set. Remove from the oven.
Heat the jam until it melts and then spread it evenly over top of the baked pudding.
Beat the egg whites along with a pinch of salt until foamy. Continue to beat, adding the remaining 1 ounce of sugar slowly, beating them until they form stiff peaks. Spoon this mixture evenly over top of the jam. Sprinkle evenly with the remaining tsp of sugar.
Place back in the oven and bake for an additional 15 minutes, until the meringue is golden brown. Serve warm 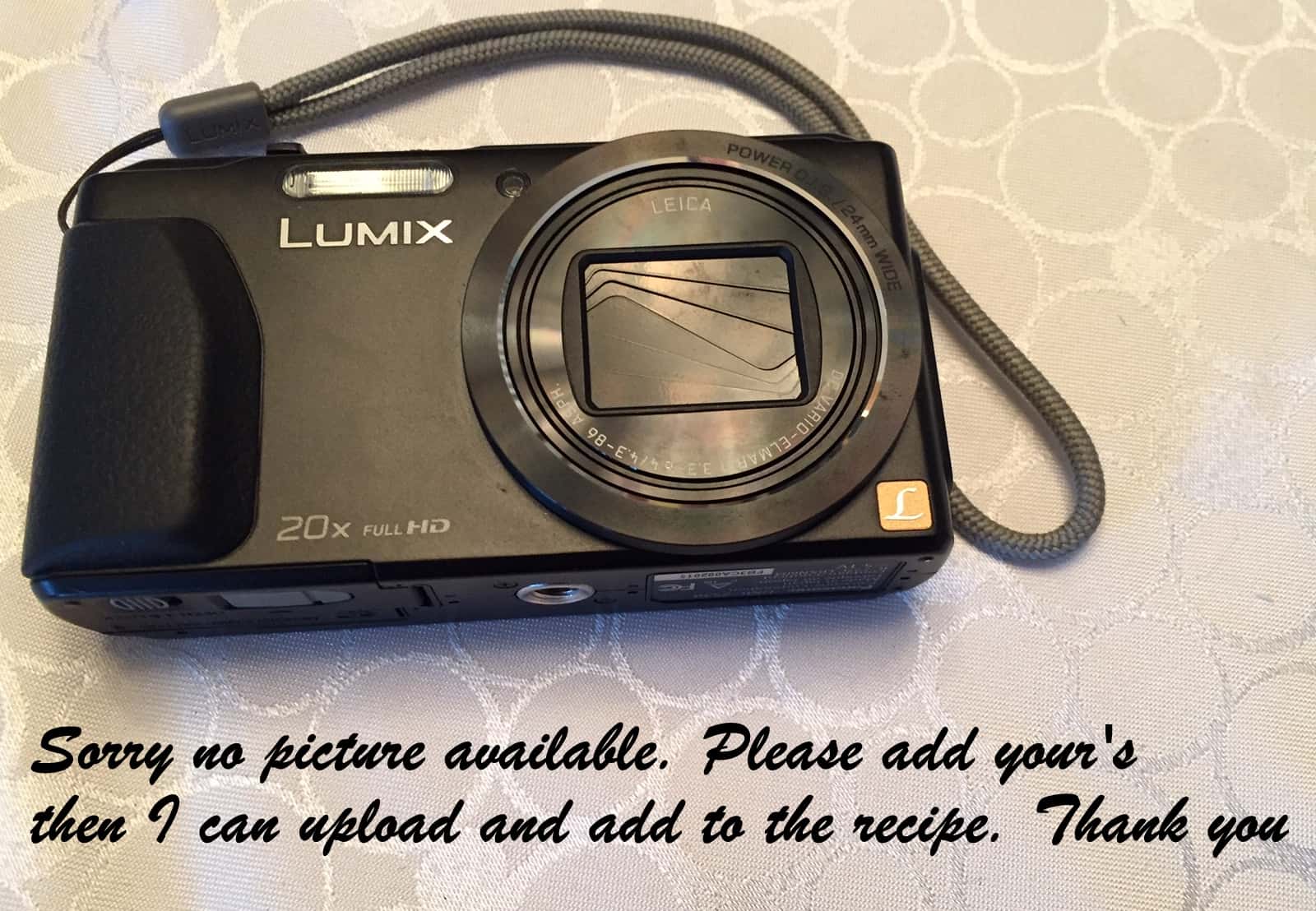 These Souskluitjies are best when they are freshly made and still piping hot, but they can be reheated the next day and should still hold their nostalgic magic! (Old fashioned dumplings with cinnamon and sugar)
Ingredients:
1½ Cup Flour
1 Teaspoon Baking Powder
Pinch of Salt
¾ Cup Butter
2 Eggs
2 Table Spoons Sugar
Water
½ Teaspoon Salt
1 Stick Cinnamon
Sugar and Cinnamon mixed in bowl to sprinkle
½ Cup melted butter

Method:
Sift the Flour, baking powder and salt together.
With your fingers rub in the butter into the flour until it has like a crumbs
Beat the Eggs and sugar until light and fluffy.
Mix the beaten eggs to the flour mixture. Make sure to use a spoon and mix lightly.
Add water in a saucepan about 5 cm deep, salt and cinnamon, bring to boil.
Spoon teaspoons of your dough into the boiling water. You can do it all at one time. Simmer on low heat for 10 minutes, cover, taking care that the mixture does not boil over. Just regulate the temperature so that it is simmering very slowly, without peeping too often!
Remove the dumplings with a slotted spoon and arrange in a serving dish. Sprinkle generously with cinnamon sugar (you will need more than you think, because the batter is not sweetened) and drizzle with the butter. Let it stand for 5 minutes to give the sugar some time to melt, then serve at once.