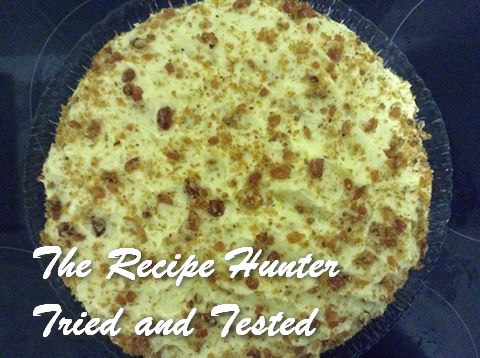 4 medium-sized ripe bananas mashed with fork
1 x 425 g tin of crushed pineapple
2 large eggs
125 ml vegetable oil
1 teaspoon vanilla essence
1/2 cup 50 g chopped pecan nuts
Icing
400 g icing sugar
150 g unsalted butter, (at room temperature)
200 g cream cheese
Squeeze of lemon juice
Pecan brittle
100 g castor sugar
50 g pecans
Method
Preheat the oven to 180° degrees C. Grease and line two 9 ” springform tins.
Sift the flour and cinnamon into a mixing bowl, then add the sugar and a large pinch of salt. Mash the bananas up with a fork in another bowl.
Add pineapple to the bananas with the oil, eggs and vanilla extract and stir with a spatula. Mix until combined, then FOLD into the dry ingredients until smooth.
Finely chop the pecans and gently fold in, then divide the batter evenly between your prepared tins.
Bake for 35 to 40 minutes, or until risen, golden and a toothpick comes out clean. Let cool for 10 minutes before transferring to wire racks to cool completely.
Prepare the icing, add the butter to mixing bowl and beat until pale and creamy. Add the cream cheese, beat again and gradually beat in icing sugar in stages, until all incorporated. Add the juice of 1/2 lemon or more depending on your taste then beat until just smooth – it’s really important not to over-mix it. Keep in the fridge until needed.
To make a brittle topping, place the castor sugar and a splash of water in a non-stick frying pan on a medium heat.
Shake flat and don’t stir it, just swirl the pan occasionally until dissolved and lightly golden.
Add the pecans and a pinch of salt, spoon around to coat, and when nicely golden, pour onto a sheet of oiled parchment paper to set. Once cool, smash up to a dust. Cover the top and sides if the cake with the pecan brittle.
When cake is cooled sandwich together with cream cheese icing and cover the sides and top with icing.
This cake is a moist cake… I just wanted to beat the ingredients with a beater, but in all the recipes I googled, the cake mixture is only mixed with a spatula. The original recipe also called for 1 cup vegetable oil, and from reviews of people that tried it, I only used 1/2 cup. Delicious !
Notes: You may add carrot instead of pineapple if you prefer. Walnuts and Cumin may be used instead of Pecan nuts
Recipe source Internet
Prepared, tried and tested by Gail Haselsteiner‎