Please meet Shehanne @ shehanne moore Smexy Historical Romance
Firstly may I say how wonderful it is to be here, especially when you might say I’m an okay plain cook, nothing fancy. Oh, and did I mention the dudes? Well, they are the hamsters who run my blog. They are very keen on recipes because they are very keen on eating everything in sight, including my guest’s dogs, cats and things.  So I should add, it’s even better to be here without them. 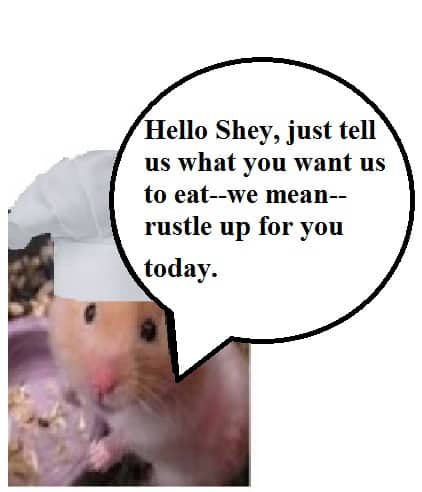 Sort of without them anyway. I’m also a writer of historical romance. I’m not going to start banging the drum for period details but I do like to weave them into the backdrop. So the foods, the recipes of whatever era I’m working in are pretty important and something I will research.  I can think of one time-travelling heroine who thought well to console herself with the parades of food and drink the rich consumed in Georgian times, and the shock she got on discovering every pea and carrot was counted by the hero’s stingy sister-in-law/aunt.  Then there was the hero who thought it would be no trouble whatsoever for the heroine and her maid to go and get a goat from the Italian hillside for his supper….
But rather than bang on any longer, or tell you what he did get for his supper, seeing as my characters often like to share their favourite recipes—some quite awful ones, I must add— 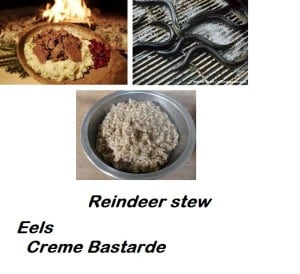 I’m going to hand you over to Gentle, a secondary character from one of my books, The Viking and The Courtesan. Gentle is a rather large and somewhat aggressive, Saxon lady whose husband dumped her in a convent in order to get his mitts on her money and she is a sort of cook which is how she sort of ends up with the Vikings.   Gentle is going to tell us a bit about food and cooking in Viking times and share a recipe.  Hopefully one she hasn’t spat in first as she is a bit like that unless she likes you. In which case you’ve probably even more to worry about….
“Thank you Shehanne and thank you Esmé for inviting me.  I’m a very plain cook. In fact, so plain, I don’t mind what I throw in the pot, even them hamsters if you want. See, from what I see round here, them Vikings ain’t fussy either, not like Lady Poshluggs–that’s the heroine by the way, just don’t tell I called her that, she gets upset—what turned up her nose at reindeer stew, when it was a delicacy it took me all day to burn…sorry,  prepare.
The amount of cabbage and turnip I gets asked to boil, here with them Vikings, is no-one’s business. And nuts, if I eats another nut, I will go just that. Though at least they do like their ale and mead. And so do I.
Now, where was I? Oh yes.  Having another tankard. I gets to do a lot of filling of them in the book. And not just other peoples’ neither when the occasional back is turned, although that Snotra what is the love of the hero’s life, has got eyes in the back of her head as well as the front I can tell you. More than he’s got or he’d see right through her.  Notice someone like me. She’s got a tongue like a whip too which is why I can’t linger.
Now, you didn’t seem to like my Reindeer Stew recipe. Or my eels. So here’s my Creme Bastarde recipe and that is what it is called by the way.

Ingredients:
4 egg whites, beaten as much as Snotra likes to beat everyone in sight.
2 cups cream
1/4 cup honey
1/2 cup milk
pinch salt
2 tsp sugar
Method:
Beat the egg whites until just frothy.
Mix into cream and bring to a boil slowly, stirring continuously.
Simmer for about five more minutes, stirring continuously.
Add the honey, the salt. Keep stirring. Then pour through a strainer.
Add the rest of the milk and the sugar and then beat it for a couple of minutes.
Allow to cool.
You know something? You would be better buying a tin of custard, a tin opener. I’m sure Creme Custarde is what it should have said and it gives you more time with the mead you see. It’s been lovely meeting you all.”