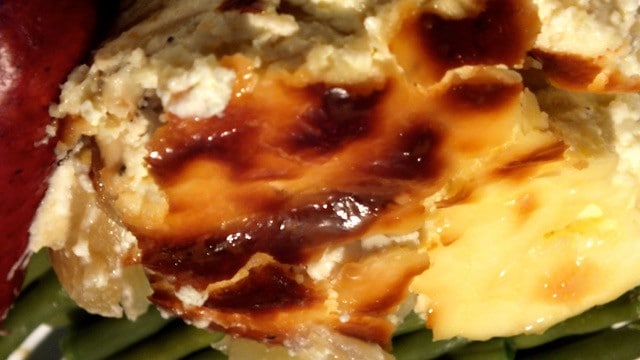 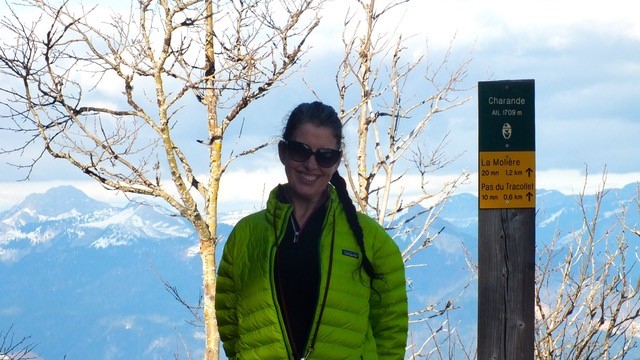 Please meet the beautiful Osyth @ Half Baked In Paradise
It was the delectable Dolly of Kool Kosher Kitchen who unwittingly introduced me to lovely Esmé who, it is entirely possible, may be deluded when one considers her rash invitation to me to guest on her, till now,  beauteous blog.  Anyhow, since Dolly is at the heart of this hopefully happy matter, I felt it appropriate to dig up a little history pertinent to a dish that I hope you will try. If you don’t know Dolly – where have you been?  She is, as her name implies a total doll and a very witty and smart one at that – honestly … go visit, you’ll love her.  So here goes ….. 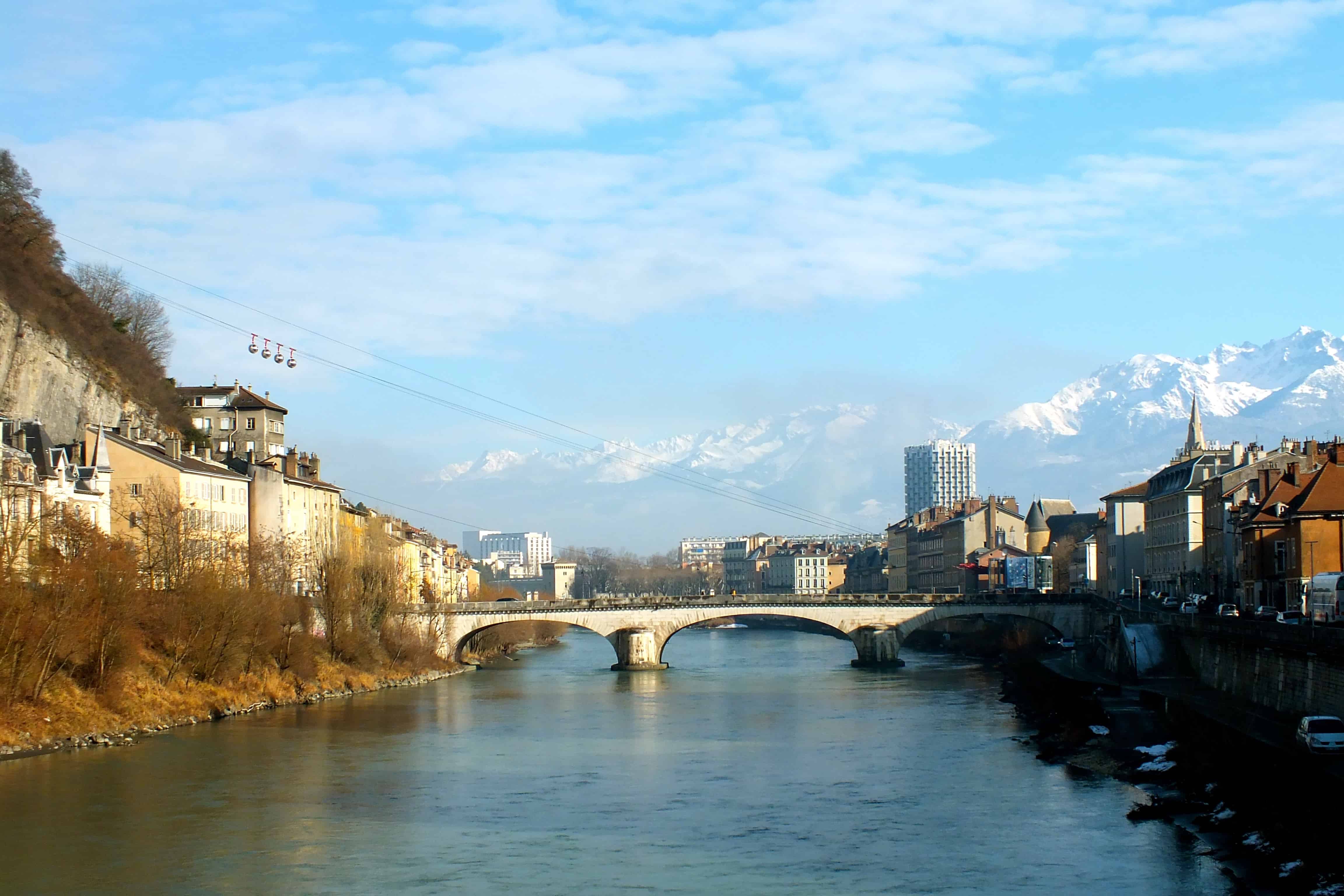 The very first walk I ever took in Grenoble was a tentative totter up to le Bastille which sits some 400 metres above the city.  I casually strolled up through le Jardins de Dauphines and found myself facing Philis.  Philis is rather arresting in a slightly aggressive warrior sort of way poised casually astride her rearing steed brandishing one-handed some sort of lethal rapier.  Clearly this is a woman to laugh in the face of weak-minded affectations of femininity like sitting side-saddle or wearing frocks and who would not shirk from skewering all comers with her dirk.  In fairness and for the aforementioned reasons, I did not instantly realise she is a she, portrayed as she is as a rather masculine, if a little foppishly dressed fighter. Of course, mens’ fashions were, a little frou frou in 17th Century France. I inched closer and it was clear that I was, indeed, beholding a gallant gal. 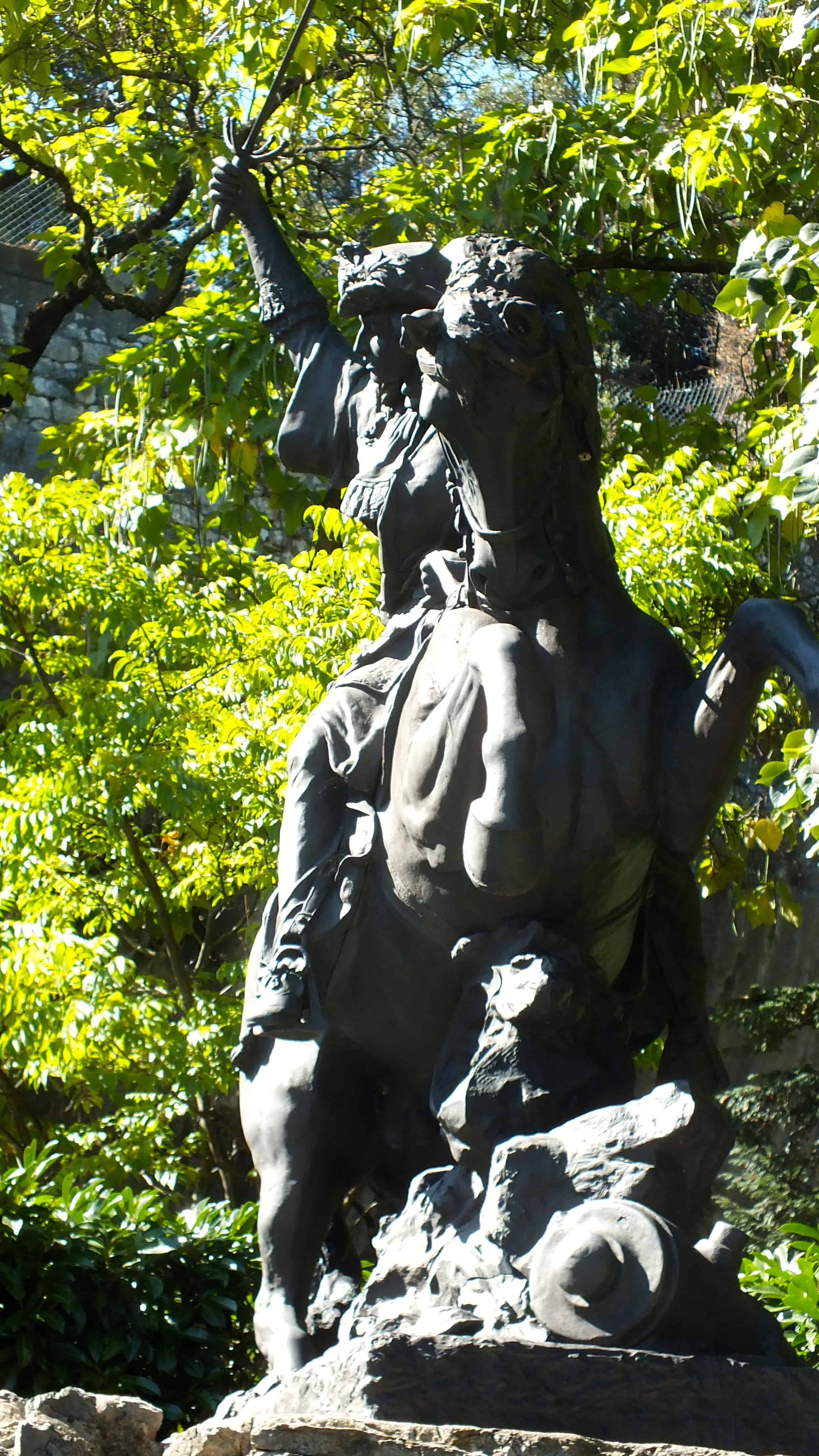 Philis is a legend.  We all know what legends are, I hope.  Legends are stories that are so old that no one can remember if they are true or not.  Keep that front of  mind as we sashay elegantly forward.  Philis was born  Philippe de la Tour du Pin de la Charce in 1645, the fifth child of high falootin’ tootin’ parents – hardly a surprise given the full mouthful of a name they blithely gave their infant.  At the age of six her Aunt, a poet of some acclaim, took her to watch a series of Roman plays in Nyon and SO amazed was the girl named Phil that she promptly declared she was changing her name that very minute to the entirely Roman Philis.  Which, let’s face facts was probably just a clever ruse to get a more girlie name.  However, it became clear that she had no intention of being a damsel, even though her newly acquired  name was a little less … manly, more maidenly.  She  competed brilliantly with her brothers  and became a breathtaking horsewoman and dashing blade wielder.  She fell in love with a Catholic, became betrothed when he promised to convert to the Protestant version of exactly the same faith as his but, a little  caddishly one might observe, he reneged on his pledge.  She then did what any self-respecting jilted girl might resolve to do … she became an even better horsewoman and an even greater blade and vowed that she would not so much as look at another man except down on him from high on her hot-blooded stallion. 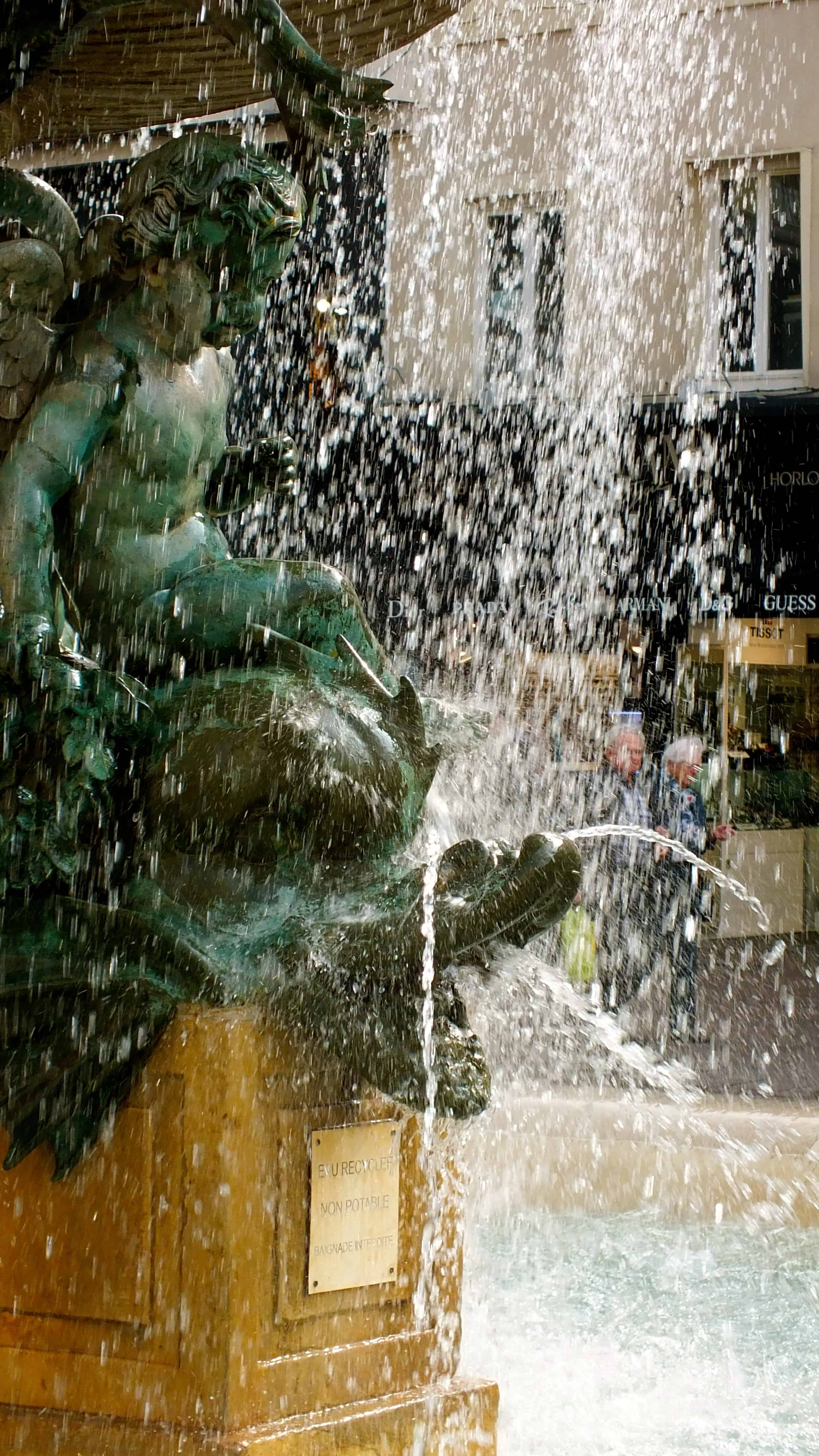 This area of France is historically named le Dauphiné which means ‘dolphin’ and accounts for the fact that though we are 275km (170 miles) from our nearest coastline,  there are an awful lot of dolphin references around the city.   Forward to  1690 and enter stage right or left depending whether you are facing North or South, Victor Amedée II. You are absolved of any guilt for not remotely realising there was a Victor Amedée I, even though it actually turns out that, in fact there was also a further Victor Amedée imaginatively named  Victor Amedée III.  Victor’s correct title was Victor Amedée Duc de Savoie.  Savoie was next door to le Dauphiné (it still is) but he had absolutely no intention of being an affable neighbour.  He far preferred the idea of snatching the Dauphiné lands to add to his already bulging, to the point of vulgar, property portfolio.  According to her legend, Philis organised a résistance and heading an army of peasants she successfully saved her region from the marauding Victor.   The rather mealy-mouthed scolars who variously argued the story for over 100 years,  claim she simply fronted a band of looters who often came here “to collect contributions from citizens of local towns and villages” and that it was thanks to her relations with the French Royal Court in Paris that she was ever rewarded with a pension from King Louis XIV.  Whichever version you choose, by the 19th Century her myth had mushroomed and for a while she was called Jean d’Arc du Dauphiné.  Several historians have muted her laurels but she is still proudly acclaimed Heroine de Dauphine on her statue.  I know which version I prefer.

And as this guest piece is being written for a cookery blog I thought it only fitting that I give you an appropriate recipe: Le vrai Gratin Dauphinois.  You will kindly notice that a real Gratin Dauphinois has no cheese in it even though it is said that Escoffier experimented and was rumoured to occasionally add a little.  Like a Quiche Lorraine, here in this Gratin’s spiritual home, the real deal has no cheese and that is how I infinitely prefer it.   If you doubt me, give it a try – I promise it is a sumptuous experience that belies its meager list of ingredients. 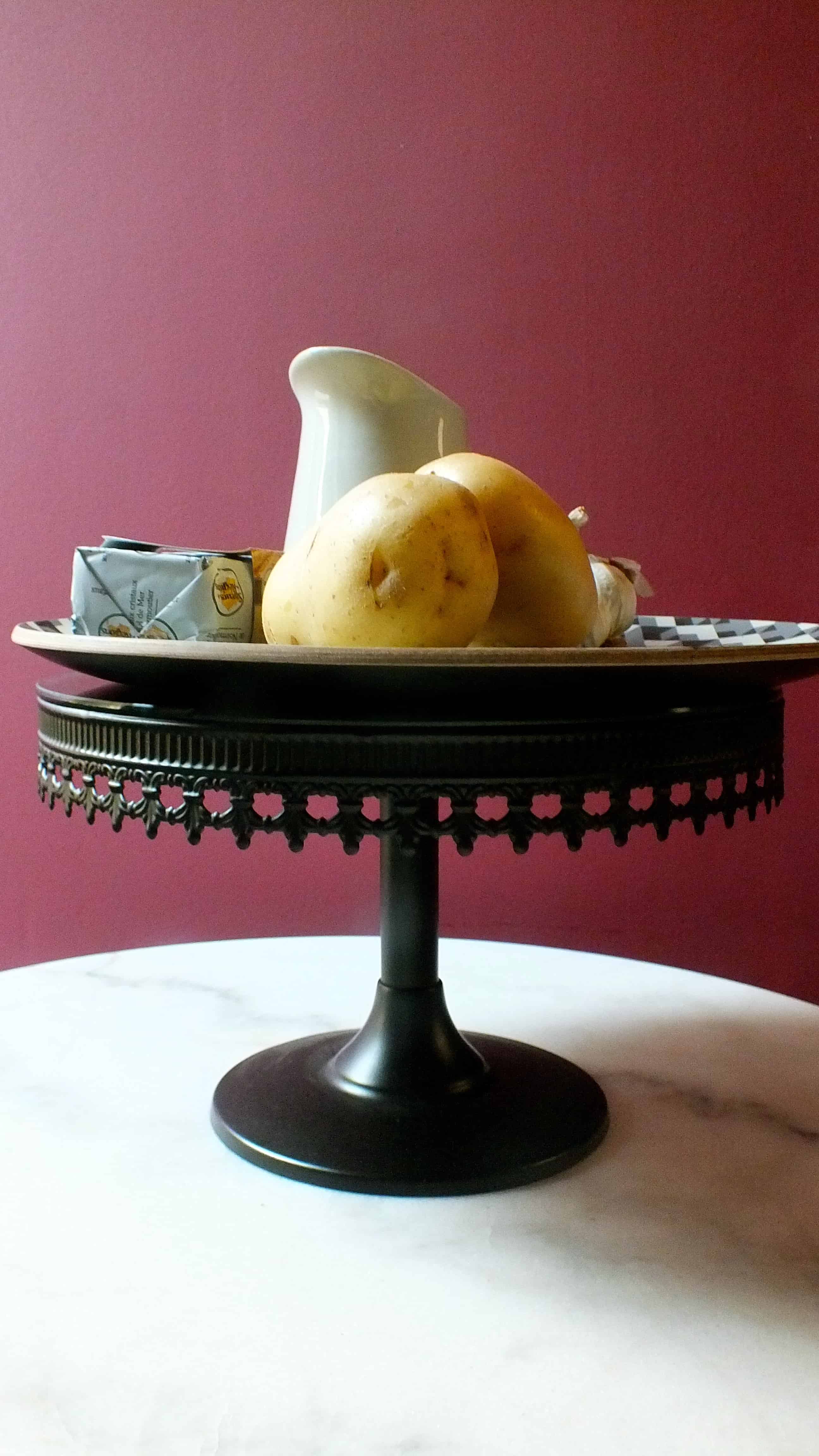 Ingredients:
Potatoes – not waxy new ones.  King Edwards are perfect
Double cream or Crême Fraiche – you can dilute with milk if you prefer.   I don’t prefer.
Garlic
Freshly ground nutmeg
Butter
Freshly ground black pepper
Salt – if your butter is unsalted
Method: 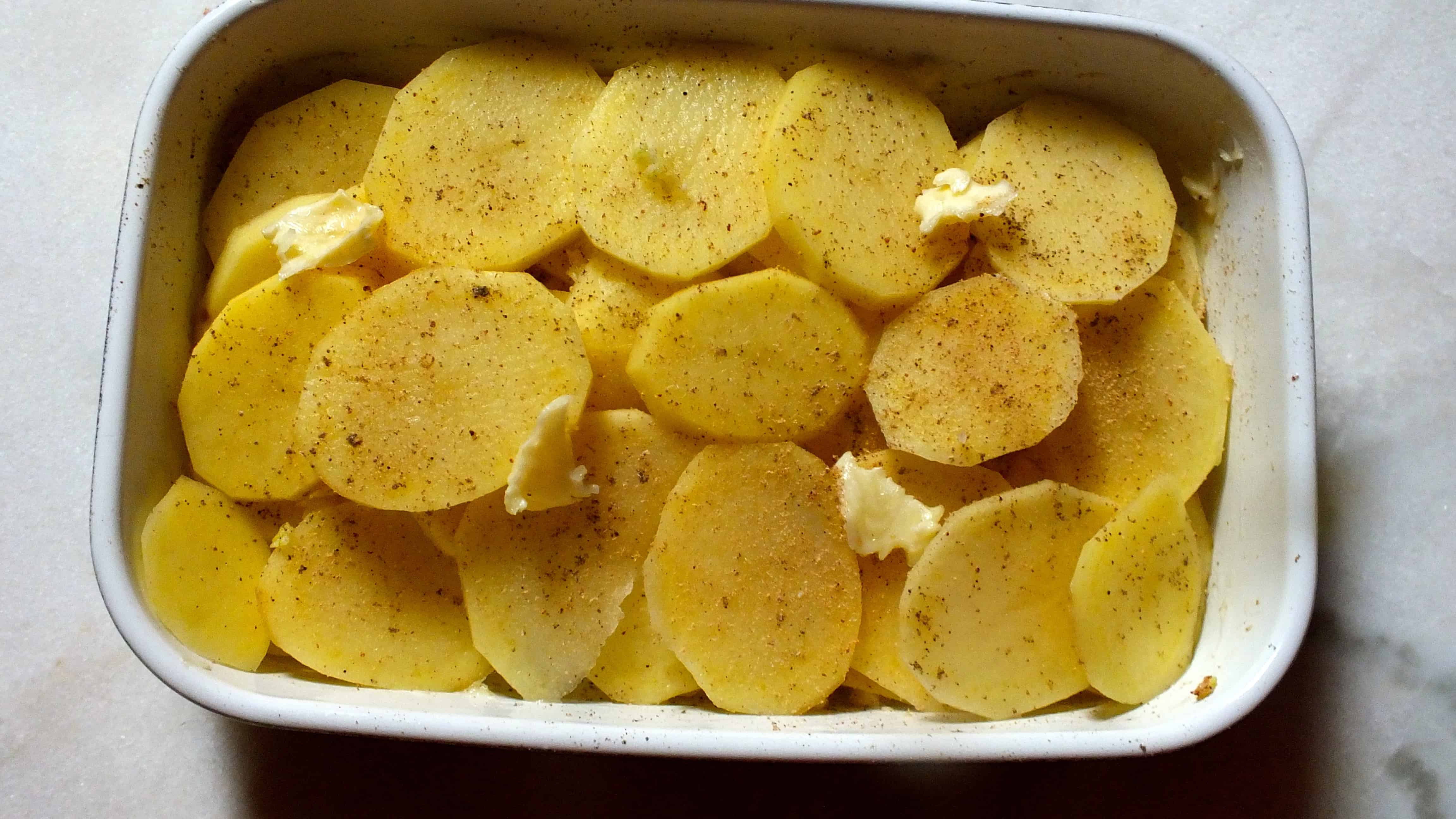 I served ours with green beans and Diot.  Diots are a traditional Savoyard sausage.  I apologise for being unable to resist the irony …

PS:  Eat only fruit for many days afterwards as a penance for the ambrosial decadence of the dish and to notionally save the impending blockade in your arteries.  But not before you have triumphantly taken up the saved peelings, coated them in a little oil of choice (always olive chez moi) and a good grind of black pepper.  Or frankly whatever you like to season them, who am I to dictate to you?  Pop them in a highish oven for 10 minutes.  Recline on sofa or chaise longue and idly nibble as a little snackette with your choice of libation. 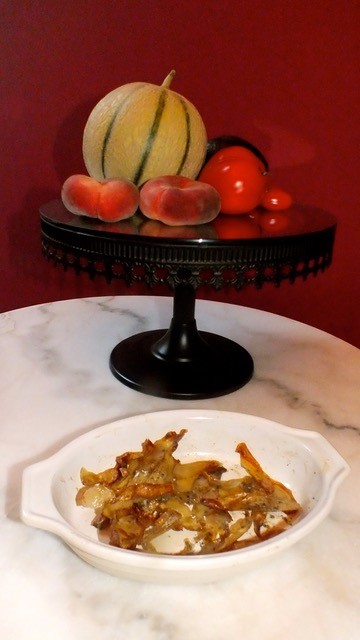 Do Not Sell My Personal Information

Turning this off will opt you out of personalized advertisements delivered from Google on this website.