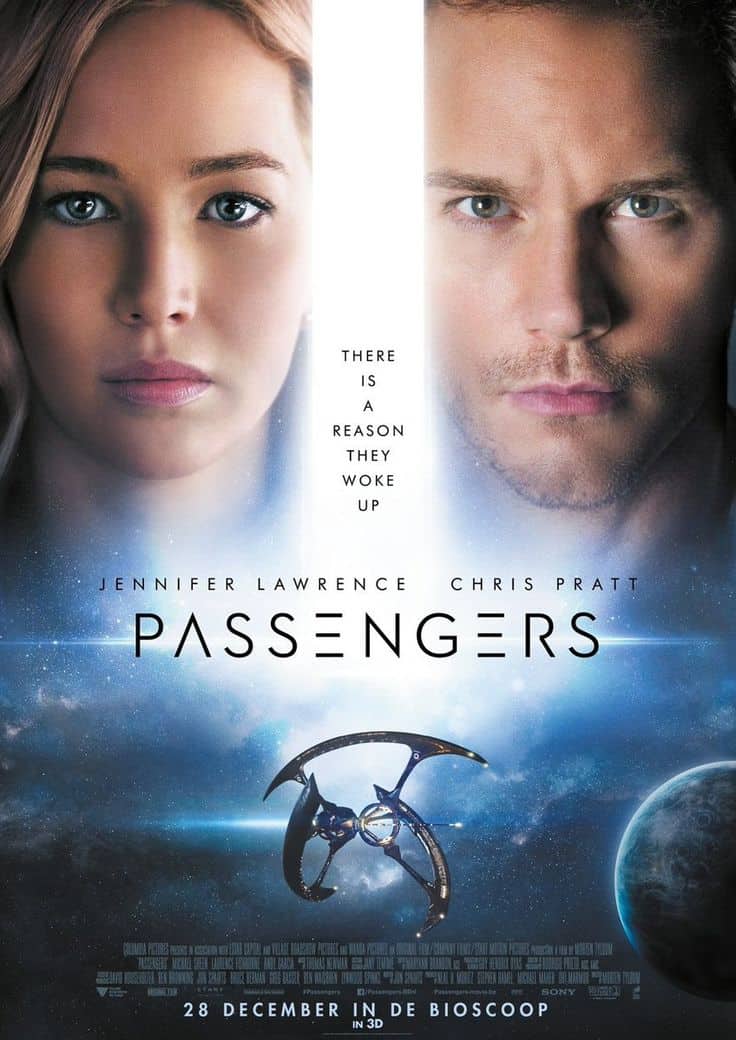 This movie is so misunderstood. It has received a lot of bad reviews in which critics have complained about how it unexpectedly changes genre half-way through, but personally, I think it was a romance all along.
After all, it’s a movie about two very lonely people who are stuck on a spaceship together. If we’re going to get picky about genres, this obviously falls into the romance category (okay, maybe I’m biased because I’m a romance writer).
The first character we are introduced to is Jim Preston (Chris Pratt), an engineer who is traveling to a colony on another planet. The whole journey should take 120 years, and all the passengers are cryogenically frozen in their capsules so they don’t age. But Jim has a problem. Due to a technical glitch, he wakes up from his artificial sleep, and he is now stranded all alone with a 90 year journey ahead of him and no one to talk to but an android bartender.
Basically, Jim is screwed. He tries to send a message back to earth, but realizes it will take years to arrive and even longer to receive a response. He tries to come to terms with being alone for the rest of his life while the other sleeping passengers continue on their journey, but he’s only human. He decides to wake up one other passenger to keep him company.
Of course, he just happens to pick a very attractive and charming young woman named Aurora Lane played by Jennifer Lawrence. He “gets to know her” by watching video footage where she talks about herself and why she wanted to go on this journey in the first place. We get a glimpse of a life that is outwardly glamorous but is missing something… someone to love perhaps?
Is Jim’s decision morally shady and reprehensible? Absolutely. Even more so, considering that he pretends that Aurora’s waking up was an accident and doesn’t tell her the truth, allowing her the time to befriend him and fall for him. Are we supposed to easily forgive him? I don’t think so. But in the end, we are asked to forgive him, and I think we can understand his position. It would be hard to say what any of us would do in his situation. 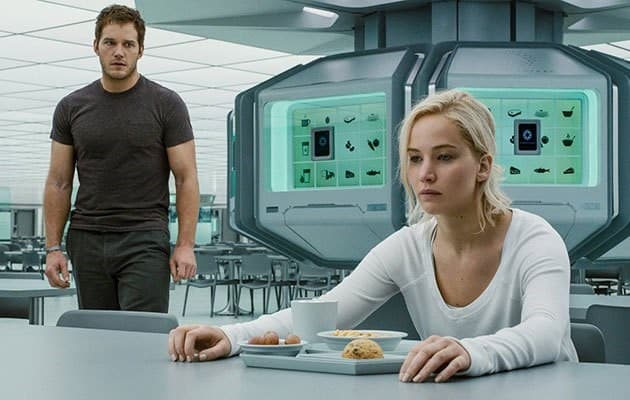 One critic called this a “sick wish-fulfillment fantasy” since Aurora is basically like Jim’s captive, her destiny controlled by him, the life she had chosen taken away. But for me, the more interesting part was what this story-line said about monogamy. The question it asks is, would it be possible to love someone and stay sane for the rest of your life if you had no other people around you, just the two of you?
This film was completely entertaining and engrossing throughout. It wasn’t very philosophically deep, but the simple message that it conveyed was articulated in an exciting and romantic story. I actually watched it on an international flight, and being a passenger, it was eerily relatable.
Despite the latter half of the film being somewhat typical Hollywood action stuff, it didn’t have that soulless quality for me that sometimes accompanies blockbuster films. There was a sense of humanity in it. I enjoyed it all the more not knowing what its proper genre was supposed to be or where this wild ride was taking me.

Not so coincidentally, the message of this movie is about relinquishing our very understandable human need to control our destiny. Sometimes, we’re just passengers in life, and things will take a strange turn, but the important thing is how we deal with it. If we know the exact genre of a film, we can probably predict the ending and feel more in control, but sometimes it’s good to let go and enjoy the ride.
About Carolee: I’m the author of several erotic romance stories and novels, though I occasionally moonlight as a film critic. Also I’m completely obsessed with Italian greyhounds.
Connect with Carolee:
Blog – https://caroleecroft.wordpress.com/
Amazon – https://www.amazon.com/Carolee-Croft/e/B01HMT0AEC/ref=dp_byline_cont_ebooks_1
Twitter – https://twitter.com/CaroleeCroft
Facebook – https://www.facebook.com/caroleecroft/