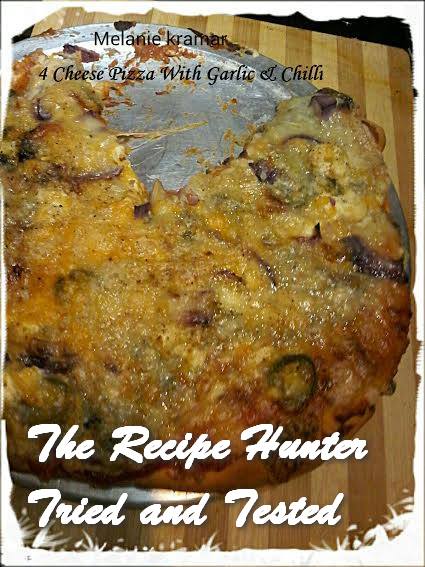 The weather in Johannesburg is dismal to say the least. I thought I’d take a nap yesterday and awoke 4 hours later to a nagging husband saying he’s hungry and going to buy a pizza. I said it had been my intention to make one today but I overslept. I made up for it with the most decadent pizza I had made to date. I made a Quattro Formaggi Pizza With Garlic And Jalapeno Chilli. It was truly awesome. Enjoy!
I was so cross! After I took the during and after pics my phone died and by the time I charged the phone I managed to reset the phone to factory settings and lost everything. They had already started eating the pizza so please excuse the picture of the eaten pizza.


Ingredients
2 cups self-raising flour
1 cup Greek Yogurt (maybe more I just squeezed out the tub till I had enough)
2 tsp Olive oil
½ tsp Oregano
(Mix to form a dough, wrap in cling wrap and set aside)
1 onion
2 tbsp olive oil
1 can Italian tomatoes, with oregano and basil
½ tsp oregano
Pinch of sugar
¼ tsp Italian truffle salt (don’t go and buy – normal salt is fine)
1 red onion, halved, then sliced and separated
4 large or 6 normal garlic cloves chopped
2 jalapeno chillies, sliced into rings
1 ½ cups mozzarella cheese
1 cup cheddar cheese
½ cup blue cheese
½ cup goat’s cheese
Ground black pepper
Directions
Preheat oven to 180 degrees.
Roll out pizza dough and place on pizza plate sprayed with olive oil spray and cook.
(I used the lid of my Biryani pot)
Bake for about 5 minutes.
Take out and cool.
Heat oil in pan and add onion and fry till golden, add can of Italian tomatoes and add oregano, sugar, oregano truffle salt and 2 grinds of black pepper.
Simmer for about 5-7 minutes.
Allow to cool. Put in a blender and puree to form a paste.
Smear over pizza dough (you won’t need all).
Layer mozzarella cheese over, followed by ¾ of the red onion, half the chilli and half the garlic.
Add the goats cheese, blue cheese, cheddar cheese.
Add the remainder of the onion, garlic and onion.
Top with mozzarella cheese.
Add a grinding of black pepper in between each layer and finally at the end.
Prepared, tried and tested by:  Melanie Kramar‎