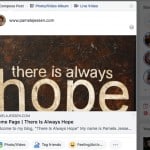 Have you ever felt helpless when it comes to a problem on your blog? You know Wordpress pretty well, and can usually solve most issues that arise, but every now and then, something comes up that leaves you stumped and you don’t know how to fix the problem. That happened to me recently, but with the help of a close online friend, we managed to solve the mystery. Let me give you the background and then I’ll turn it over to Jasmine on how she resolved the issue.

I blog at http://pamelajessen.com where I talk about Chronic Pain, Chronic Fatigue, Fibromyalgia, and Invisible Illness. For the month of October, I had been doing a series called “Interview October” where I was featuring Guest Posts by other people with Invisible Illnesses. Each post told their story and included their picture. Somehow, one person’s picture became the image that showed up every time I typed my website name in Facebook. No matter what I did in Wordpress to fix this, I was unable to change the picture to the logo I wanted to use. That’s where Jasmine comes in. I posted about my dilemma in a forum we belong to called Sharing, Inspiring, Promoting Bloggers, and she offered to help me out. I’ll let her tell her side of the story now in her own words:

One of my new, but very close friends (Pam) needed help with figuring out why the image that was showing whenever she shared her website on Facebook was the wrong one. She had posted in a blogging facebook group for some help, and I said that I could possibly help her by creating a Loom video if the troubleshooting suggestions I provided didn’t work.

What were those troubleshooting suggestions? I told her to double check the featured image on her home page; I also suggested she check the image picked by Yoast SEO plugin; and if all else failed, she should try deactivating the JetPack plugin because it has been known to mess up images on websites (including my own). None of those seemed to be the issue.

So, I went on Loom and did a bit of a video (screen recording with voice) of what my Wordpress (dot org) dashboard looked like and to show where to add the Featured Image to the home page. There was also a bit of fumbling around to check the settings in Yoast from my website. None of those seemed to be the issue.

The way I was checking whether or not the issue was fixed was by creating a new post on facebook with the link to her website typed in so that we could check if the Featured Image had changed. No dice.

At this point, Jasmine asked for permission to become an Admin on my website so she could poke around on it to see if she could figure out the problem from there. I created a new user for her and gave her Administrator privileges so she could see and do what she needed.

In the midsts of creating the second loom video of me just browsing and going around in her Wordpress Dashboard, I somehow remembered a tool that people had mentioned previously called the Facebook Debugger. I had never actually used this before, so I did what any sane person would do, I googled it.

I found the link to the tool and typed in her website address. The results showed that there was an image error between the connection of Facebook and her website. So, I had figured out what the problem was and where to fix it. Now I just needed to figure out HOW to fix it since I had never actually used Facebook Debugger. Back to Google (in a new tab)

I found an article that explained different issues that the Facebook Debugger could fix written by Elegant Themes (the people who created the Divi Wordpress theme) (https://www.elegantthemes.com/blog/resources/facebook-debugger). Turns out, I just had to press Facebook Open Graph and it would reset the connection. The article also mentioned how to manually choose which image Yoast should show, so I connected the correct image manually as well. (picture below) 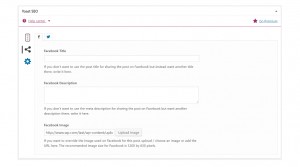 So, then I refreshed the website and checked if everything worked… it did!

At the same time as Jasmine was doing this, I also was on Google, reading about the Facebook Debugger, to see if it was something I could do myself. I went back to our Chat window to tell Jasmine I thought I’d be able to manage it, and she was typing that she had fixed it!!  I was so excited and so happy…can you tell? 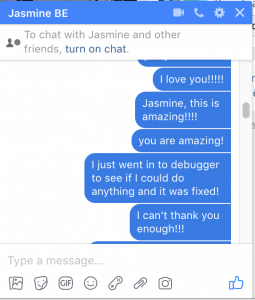 So now I know how to fix this problem if it ever arises again, either for me or for someone else. Jasmine is a tutor in “real life” and wow, is she ever good at teaching. I never would have figured this out for myself, so I’m glad I had my good friend to help me out. That’s another way that this blogging group lives up to its name of Sharing, Inspiring, Promoting Bloggers. 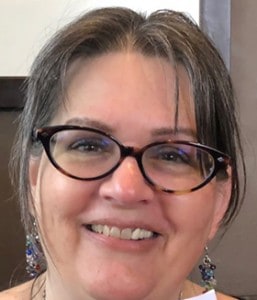 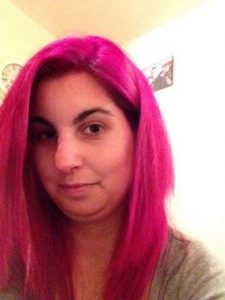