The Culinary Alphabet. The letter K 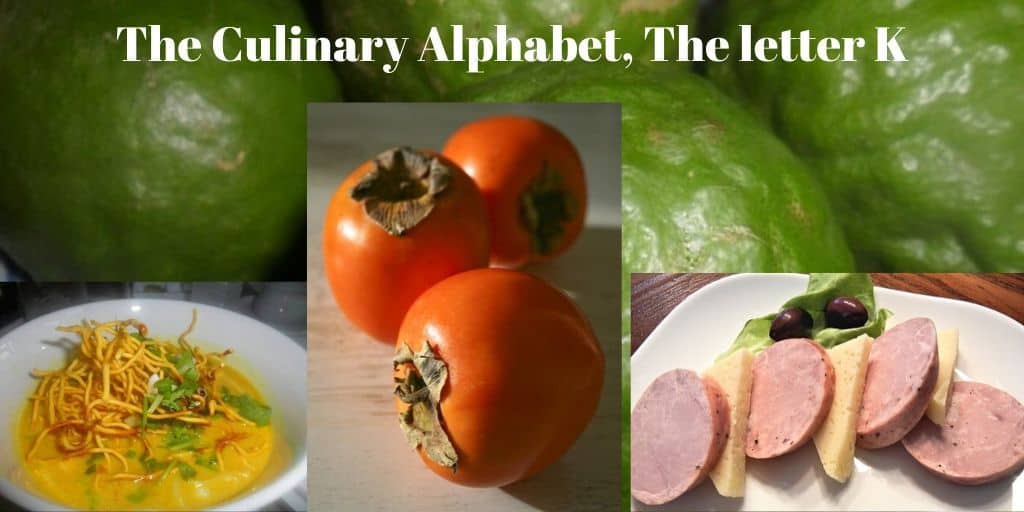 This month In my walk through the Culinary Alphabet. I am exploring the letter K.

Kippers, I remember that smell very well as a child my dad loved Kippers, So what is a Kipper?

A kipper is a whole herring, a small, oily fish, that has been split from tail to head along the dorsal ridge, gutted, salted or pickled, and cold-smoked over smouldering woodchips (typically oak).

In the British Isles and a few North American regions, they are often eaten for breakfast. In Great Britain, kippers, along with other preserved smoked or salted fish such as the bloater were also once commonly enjoyed as a high tea or supper treat, most popularly with inland and urban working-class populations before World War II.

My abiding memory is the bones and the smell you can imagine a fussy child picking all those little bones out.and screwing up her nose..lol

I have used the leaves in many of the Thai dishes that I cook they are used in many Asian dishes…The trees are small evergreen trees and prickly. The one I had was quite a young one and I had not seen any fruit…It wasn’t until a neighbor gave me some of the fruit that I put two and two together and realized that was the fruit of the tree I had growing in the garden and now we do have fruit.

The rind is very bumpy unlike the normal limes I use and when cut open the flesh is quite dry and what juice there is has an acidic, bitter and is very strongly sour tasting.

A complete contrast to the zest which is quite aromatic.

A little zest goes a long way and very finely chopped or added to ingredients it imparts a beautiful citrus flavour. I have added a little video as there is a knack for chopping the lime leaves very finely. You need a really sharp knife and it is an art…

Nutritionally the benefits of the Kaffir Lime is from the oils in the rind and the high levels of citronella and limonene which are both antibacterial and anti-inflammatory.

Oil extracted from the leaves is also used for medicinal purposes, it is mixed into shampoos, soaps salves and fragrances.

Most often it is used in oral products or the leaves can be rubbed directly onto the gums as it eliminates harmful bacteria in the mouth.

In the rural areas and villages, you will find many herbs, fruits and vegetables are used like this to help alleviate and cure many ailments as many either are to far away to visit the doctor or cannot afford to or even just prefer to use remedies passed down through the generations.

It is also used as an insect repellent by mixing the juice or oil with a lotion or salve and it reduces the chance of being bitten.

I hope you have enjoyed learning about the Kaffir Lime…Do you use Kaffir lime or its leaves ????

A thick, sweet sauce made with tomatoes, vinegar, sugar, salt, and spices. It is also known as catsup and catchup.  It is said to be derived from “fet-tsiap,” a spicy pickled fish condiment popular in China.

Ketchup was first mentioned in print in 1711.  Most American ketchup is made with tomatoes.  The F. & J. Heinz Company of Pennsylvania sold the first bottled tomato ketchup as of 1876.

A fruit which I have seen and never bought until a little while ago…Why? I just haven’t but I saw it mentioned in a few recipes which prompted me to try it…

Kaki (Persimmon) is in season here now and I have to admit not a fruit I had tasted… seen never tasted but this week we did my daughter-law hadn’t tasted it either so we bought some and it is lovely the texture of a crisp apple fairly sweet but very nice.

The persimmon is one of the classical fruits of China, from where it was introduced in ancient times to Japan. Mainly grown in China and Japan commercially but smaller growers have developed in Italy, Israel, Brazil, California (U.S.A.), Australia and New Zealand. In South-East Asia, it is grown on a limited scale in Java, Sumatra, Malaysia and Northern Thailand.

At present grown by hill tribe growers here in Northern Thailand. Production has been slow to cultivate and they are mostly sold as fresh fruit which is probably why by comparison with other fruits they are expensive.

Kielbasa (kihl-BAH-sah) – Kielbasa is a smoked sausage made from pork. Sliced and eaten with cheeses and olives.

Love it or hate it but there is no denying the health benefits that this humble vegetable contains.  I know many of you dislike Kale, but I love kale, although I do not love kale in a smoothie.  Well, for those of you who buy greens powders at some expense so I am told …  Dehydrate those tough outer leaves that you would normally throw away and turn them into a greens powder to add to your morning smoothie or sprinkle on your salads…

Just a question when I lived in the UK the kale was what we called curly Kale the kale here is like the one pictured I haven’t seen curly kale here. What kale do you get curly or straight ???

One of my favorite kale recipes

Cook Belly Pork in the oven until tender and crispy. For about 30 mins.

I normally cook on about 180/200 degrees to start and then reduce heat slightly to 160 degrees. When the pork is tender turn up the heat to crisp the pork. When nice and crispy remove the pork from the oven and chop into bite pieces.

Heat the wok or large fry pan and add half tablespoon oil.

Add crushed garlic and chilies, add little hot water and cook for 1 minute, at this point the chilies may overpower you, ha ha, turn on expel fan and add chopped Kale.

Stems first if using as they take longer to cook. I use stems of Kale also if they are quite a thick slice into 2-inch pieces.

Cook for 2 mins and add remainder of Kale leaves and turn over a few times ….I use fish slice as I find it easier to just turn kale over.

Add 2 tbsp Oyster Sauce and 1 tbsp Soy along with few shakes of Maggi (seasoning Sauce). Taste and adjust if necessary. Cook for further 2 to 3 minutes.

Check the seasoning again and serve with steamed rice.

The word kosher means “fit or proper.”  It refers to food that is proper for the Jewish people to consume as set out in the laws of Kashrut (the kosher dietary laws) in the Old Testament.

The process of working dough by mixing, stretching, and pulling.  Kneading is most often used in bread dough and is a necessary step in order to develop the gluten.  To knead, Gather your dough into a ball.  Using the heel of your hands, press down on the dough.  Pull up the part of the dough that was flattened by your hands and fold it back over on itself.  Keep repeating the process, turning the dough periodically.

Koogel means “ball” or “Cannonball” in German.  This name evolved because of the small round pot in which such puddings used to be cooked.  This round, covered pot would be placed in the larger pot of cholent, a slow-cooking stew of chunks of meat, marrow bones, beans, barley, potatoes. Classic ones are made with noodles or grains (sometimes even leftover bread).  They often have a sweet ingredient such as raisins or apples, but some are savory.  Today, they are even made with a variety of vegetables in a style reminiscent of quiche or casseroles.

What is characteristic of all of them, though, is that they are made without water, using fats and/or eggs to bind the ingredients,

Khao Soi originated from here in the North and holds almost iconic status..said to originate from the Chiang Mai area the name means ” cut rice” in Thai although it is thought the word originates from the Burmese word for noodles and is a corruption of the word Khao swe.

Are traditional handmade Thai pancakes and I was very lucky to see them being made a real family affair.

Red kidney beans are the most common kidney bean. These large beans have a dark red color, glossy skin and firm texture, making them suitable for soups, stews, chilies, and other dishes that cook for a long time.

The white Kidney bean also known as cannellini beans are large, with a thin, white skin and a subtle flavour. These beans are more suitable for salads and dishes that require a shorter cooking time.

Anything alive and anything fresh can be used for Kinilaw cuisine (crustaceans, fish, meat, vegetables, fruit, flowers, insects, fowl, and snakes; food as rare and unusual as balatan (sea cucumber), lima lima (spider conch), kohol (river snail), abatud (larva of coconut beetle), butbut (sea anemone), guso (seaweed) goat, dog, carabao, venison, wild boar, heart, liver, tripe, animal skin, Puso ng saging (banana core) and to name some many of which are local ingredients. It is pretty similar to Thai Cuisine where you will get regional differences to the same dish.

10 thoughts on “The Culinary Alphabet. The letter K”