The Culinary Alphabet, The Letter W 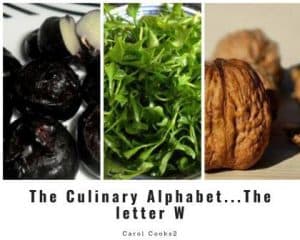 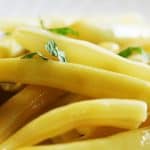 Can you believe it, we are getting close to the end of this culinary series.

Classed as one of the world’s healthiest foods the Walnut originated in the Mediterranean region and Central Asia and has been part of the human diet for thousands of years. These nuts are rich in omega-3 fats and contain higher amounts of antioxidants than most other foods.

If you’re looking for a snack food that lowers your cholesterol levels, research shows that you should get cracking! Ha Ha… In a study published by The Medical Journal of Clinical Nutrition, it was found that people who munched their way through 1.5 oz of whole walnuts 6 days a week for 1 month lowered their total cholesterol by 5.4% and LDL cholesterol by 9.3%.

Wasabi aka Japanese Horseradish is so rare that the wasabi you eat with your sushi probably only contains about 5% wasabi. Wasabi is harvested by hand and takes about 18 months…

Quite simply a water bath is simply a pan of hot water placed in the oven, this method has two benefits when baking. First, a water bath adds moisture to the oven and this is important for baking foods like cheesecakes, which tend to crack from the heat of the oven, or custards which can become rubbery without moist heat.

Wandering around a food market in Wanon, Northern Thailand…and losing myself among the sights and smells of beautiful tempting Thai food. I spied a few fruits and vegetables which were unknown to me and this one. Although once I knew what it was then I recognised the taste ….without knowing the name I was puzzled I sort of knew the taste but didn’t connect the dots…lol

We were talking and looking for these a few weeks ago when were thinking about what to cook for dinner and reminiscing about the Chinese food we remembered having years ago with these crunchy water chestnuts in..you never got many just a few slices… I was then looking in the shops at imported goods to see if I could them and no luck…Then there they were the other day right under my nose and fresh ones….strange world… When your thoughts take you unexpectedly to what you were looking for.

Usually available in specialty groceries or supermarkets, they should be washed thoroughly and peeled with a sharp knife, especially if to be eaten raw. At this point, adding a few drops of lemon juice keeps them from turning brown when steamed or sautéed.

Watercress is an often overlooked leafy green that packs a powerful nutrient punch. Its small, round leaves and edible stems have a peppery, slightly spicy flavor.

Watercress is part of the Brassicaceae family of vegetables, which also includes kale, Brussels sprouts, and cabbage.

Cook the rice and toss in the watercress with ½ to 1 tbsp oil, cover and leave to stand for at least 10 minutes.

Season the pork and with the pan on medium heat add the oil and add half of the ginger and cook until the ginger is golden, drain and set to one side.

Add the pork and brown for 3-4 minutes and then remove from the pan. Add the remainder of the ginger and the garlic and cook for 30 seconds add the marmalade, fish sauce and lime juice bring to a slow rolling boil stirring until it is syrupy then return the pork to the pan simmer for 1 minute and serve over the rice.

Garnish with the crispy ginger and watercress sprigs.

Is a Flemish stew…If you think the Irish and British have got a monopoly on comfort food, be prepared to meet Belgian waterzooi. The chicken stew originating in Ghent will leave you and your stomach mightily satisfied on a rainy day. Best served piping hot with a basket of bread it is one dish of comfort food it contains leeks, carrots and potatoes in a cream-based soup with either chicken or fish…

There is very little difference between green beans and yellow waxed beans…Green beans get their color from chlorophyll, and yellow wax beans are simply green beans that have been bred to have none of this pigment. Found at farmer’s markets and gardens in the warmer months of the year they are sometimes known as yellow snap beans.

Whey is what is left after the milk has been curdled and strained…Popular many years ago it has now had a resurgence in the healthy eating market and once again is popular and now has several lucrative commercial uses.

Who doesn’t love mustard on their cold meats or in a sandwich or a sauce?? Mustard is very expensive and not always available here hence I had to learn to make my own…It is easy, cheaper and has no nasties and tastes much nicer all the reasons why we should make our own mustard.

I love wild rice and it is freely available here I normally mix it with white rice to add a bit of texture and of course I like it. Wild rice is an aquatic grass, not a grain, though it’s referred to as rice because it looks and cooks like all other types of rice. … It’s also the only rice Native to North America and only two other varieties exist worldwide, which are grown in Asia where they’re consumed as a vegetable, not a grain.

I love whitebait and it is a popular starter in the UK…where whitebait principally refers to the fry of Clupeidae fish, young sprats, most commonly herring. They are normally deep-fried, coated in flour or a light batter, and served very hot with sprinkled lemon juice and bread and butter…Delicious…

Here in Thailand, the same little fish are eaten alive with herbs and chilies…

Is sausage in Germany…There are about 1500 different types all with their own unique fillings…The Germans have a saying: Alles hat ein Ende nur die Wurst hat zwei. (Everything has an ending, but the sausage has two).

Just as different parts of Germany have different accents and beers each region has its own wurst or sausage often made to a long-held family secret recipe. It is common street food, found at festivals, sporting events even fine dining…

That’s all from me for this year I hope you all have a very Merry Christmas and a Happy and Healthy New Year…I will be back in the New Year to bring this series to a close…Thank you, Esme, for hosting me every month…

I love shopping at the local markets, finding fresh, natural ingredients, new strange fruits and vegetable ones I have never seen or cooked with. I am generally the only European person and attract much attention and I love to try what I am offered and when I smile and say Aroy or Saab as it is here in the north I am met with much smiling.

Some of my recipes may not be in line with traditional ingredients and methods of cooking but are recipes I know and have become to love and maybe if you dare to try you will too. You will always get more than just a recipe from me as I love to research and find out what other properties the ingredients I use contain to improve our health and well being.

The environment is also something I am passionate about and there are now regular columns on my blog this year. It is important that we are mindful of the world we live in…

Retired No One Told Me!

Exciting for me hence the title of my blog, Retired No One Told Me! I am having a wonderful ride and don’t want to get off, so if you wish to follow me on my adventures, then welcome! I hope you enjoy the ride also and if it encourages you to take a step into the unknown or untried, you know you want to…….Then, I will be happy!

If you’re new to my blog and missed any of the previous Letters in the Culinary Alphabet, we got you covered, as you can always read them all.

8 thoughts on “The Culinary Alphabet, The Letter W”