Cheesecake – waste not want not 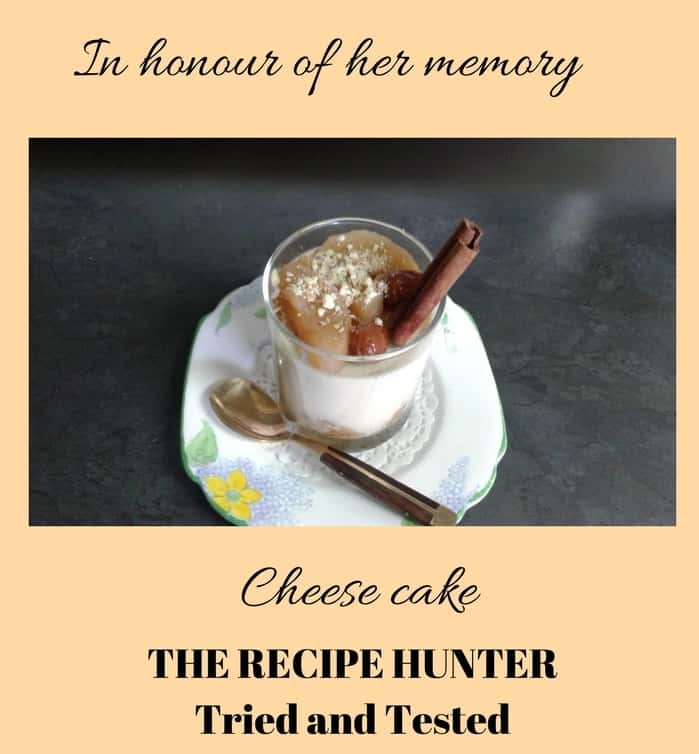 Cheesecake – waste not want not

I have spent a lot of mind-time thinking about who and what women are.
All that thinking is a work in progress. However, Mom keeps popping in during these thinking sessions.
In honour of her memory, I have been cooking Mom’s food this month, well, my version of her cooking.
Curried beans. Stewed apples. Green beans with potato. Bread and butter pudding.
I also think about her thrifty habits, waste want not.
She had to be thrifty because of the tight hold on the purse. To honour that, I made a dessert last week and called it ‘waste not want not’.
While peeling a bag of apples for stewing, I considered the wastage, so much remained on the cores and peel.
So, I popped all the waste into a pot with rooibos tea, leftover from the morning brew, added lemon and some sugar and boiled it all until broken up.
After cooling down, all the pips and hard bits were removed and what remained was blitzed to a pulp.
This was put back on the stove, to reduce volume and thicken.
When cooled, placed it in the fridge while I decided what to do with it.
Hmmmmm, cheesecake came to mind.
Small glasses were hauled out of the cupboard, and spicy ginger biscuits were placed in each one. Sherry, about half a capful over each biscuit.
To the apple pulp, half a tub of smooth cottage cheese and mascarpone were added and blended well.
Gelatine was added at the end, after careful calculations.
I use the powdered form of gelatine. Measured the pulp to assess volume.
This is the guide I follow: 3x5ml to 500ml for the light set, 4x5ml to 500ml for the mould set. This calculation was done before adding the cheese.
The mixture was divided up evenly and filled into eight glasses. Then set aside to firm up.
When serving, slices of stewed apple were placed on the top of the mix.
Voila! Waste became a sophisticated dessert, fit for the most discerning palate.

4 thoughts on “Cheesecake – waste not want not”