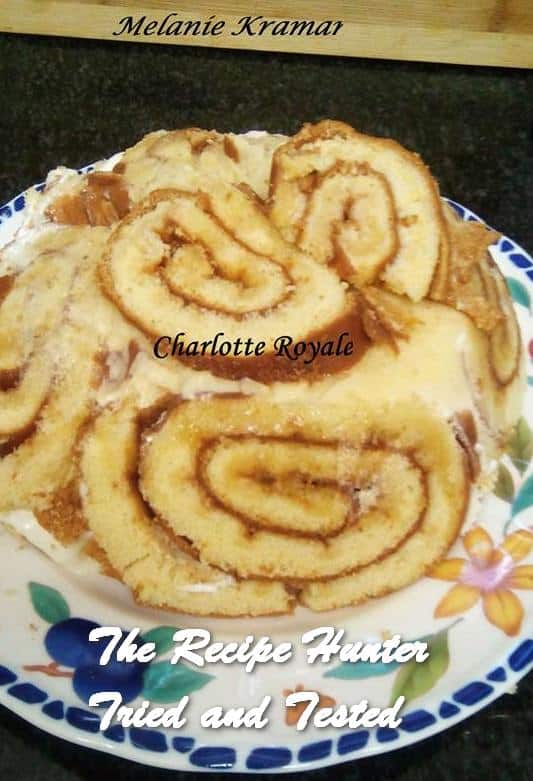 Today’s desert was another first attempt by me after watching baking on Food Network (for a change) because I’m not a baker.
It was all about the perfect Swiss Roll and the various fillings.
I quite fancied the Charlotte Royale, which I made. But I defeated the whole purpose because I cheated and went and bought the Swiss roll :-). (No time I had guests and oven was very busy)
I just made it because I loved the idea.
I am however, going to include the recipe for the Swiss roll as well.
Ingredients
For the Swiss roll
• 4 large eggs, separated and at room temperature
• 1/4 cup icing sugar, plus extra for dusting
• 1 tsp vanilla extract
• 1/8 tsp salt
• 2 tbsp sugar
• 2 tbsp granulated sugar
• 3/4 cup cake flour
• 2/3 cup raspberry
For the Bavarian cream
• 1 cup whole milk
• 1/2 vanilla pod or 1 1/2 tsp vanilla pod paste
• 4 large egg yolks
• 2/3 cup sugar
• 2 tbsp gelatine powder
• 1 1/2 cups whipping cream
Method
Preheat the oven to 175°C. Line the bottom of a 15-x-10-inch Swiss roll tin with parchment paper.
Place the egg yolks and icing sugar in a large bowl or in the bowl of a stand mixer fitted with the whip attachment and whip until the yolks have doubled in volume and hold a ribbon when the whip is lifted, about 4 minutes. Whip in the vanilla.
In a separate bowl, whip the egg whites with the salt first on low speed until foamy, then increase the speed to high and pour in the granulated sugar, whipping until the whites hold a medium peak.
Sift half of the flour into the yolk mixture and fold in using a whisk, then fold in half of the whipped egg whites. Repeat with the remaining flour, and then change to a spatula to fold in the last of the whites until evenly incorporated.
Spread the batter into the prepared pan, taking the time to ensure the batter is level.
Bake the cake for about 12 minutes, until the cake springs back when gently pressed in the centre.
Let the cake cool for about 2 minutes on a cooling rack, then loosen the sides with a spatula. Sift a layer of icing sugar over the surface of the cake and cover with a clean tea towel.
Place a second cake pan over the towel and quickly invert the cake, removing the pan it was baked in.
Peel off the parchment paper and dust this surface with icing sugar.
Roll the cake up with the towel and let it cool completely in the tea towel.
Stir the raspberry jam to soften.
Unroll the cake and spread an even layer of jam over the cake. Roll the cake back up again, dust the top with icing sugar.
Cover and store at room temperature until ready.
Bavarian cream
Bring the milk up to a simmer along with the scraped seeds from the vanilla bean (or the vanilla bean paste, if using).
In a separate bowl, whisk the egg yolks and sugar. Slowly pour the hot milk into the yolks while whisking constantly, then return the entire mixture to the pot.
Cook the custard over medium heat, stirring constantly with a wooden spoon, until the mixture thickens and coats the back of the spoon, about 4 minutes.
Strain the custard into a bowl.
Stir the gelatin with 1/3 cup of cool water and let it soften for a minute.
Whisk this into the custard while it is still hot.
Cool the custard completely to room temperature, then chill the custard for about 15 minutes, so that it is cool to the touch but not setting.
Whip the cream to soft peaks and fold this (using a whisk) into the cool custard mixture. Assemble the bowl while the custard is still fluid.
Line a bowl with plastic wrap.
Slice the Swiss roll into ½ inch slices and line the entire bowl, pressing the jelly roll slices together as tightly as possible without altering their shape.
Pour the Bavarian cream into the bowl and place any remaining jelly roll slices on top. Cover the bowl with plastic and chill for at least 4 hours to set.
To serve, invert the bowl onto the serving plate and peel away the plastic wrap.
Slice into wedges to serve.
Source: Food Network
Prepared, tried and tested by: Melanie Kramar‎