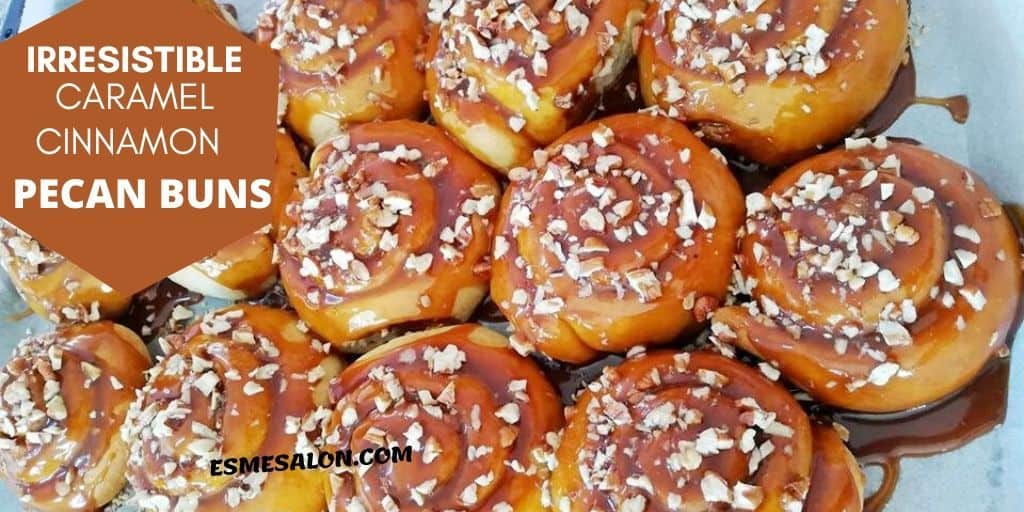 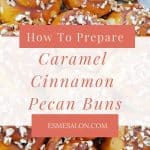 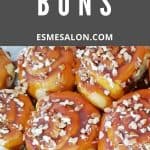 Looking for Caramel Cinnamon Pecan Buns, well you have come to the right place.

The most irresistible Caramel Cinnamon Pecan Buns, and to add to it that awesome addition and cinnamon flavor just have you reach out for more every time.  Although it’s sticky, you will love it and lick your fingers to the bone each time as these buns are perfect for any occasion!

How to prepare irresistible Caramel Cinnamon Buns with Pecan topping

Do you know what’s the difference between sticky buns and cinnamon rolls?

Though they both send sweet smells of cinnamon wafting through our kitchen, there is a difference between sticky buns and cinnamon rolls.

Unlike sticky buns, cinnamon rolls are placed directly into a baking dish, and a cream cheese glaze is drizzled on top after baking. Typically, cinnamon rolls do not contain nuts.

Boulkas or Cinnamon Buns made for Rosh Hashanah

Some history and background

Sticky buns are a type of dessert or breakfast sweet roll that generally consist of rolled pieces of leavened dough — sometimes containing brown sugar or cinnamon — compressed together to form a kind of flat loaf corresponding to the size of the pan in which they are to be baked. Before the dough is placed in the baking pan, the latter is lined with the “sticky” ingredients, such as brown sugar, honey (or both), as well as nuts and raisins, and perhaps more sugar and sometimes butter. After the buns are baked, they are inverted so that the pan lining then becomes a topping. Commercially produced sticky buns, however, are usually just baked in an aluminum loaf tin, which allows the topping to suffuse the buns, making them sticky throughout. The way the buns were baked allows them to more or less be pulled off as individual servings, although it is often a futile effort.

Sticky buns have been consumed since the Middle Ages, at which time cinnamon became more prominent.

Sticky buns also have a Germanic origin and were originally known as “Schnecken“. The Pennsylvania Dutch introduced Schnecken in the United States. Wherever 18th-century German settlers (such as the Pennsylvania Dutch) went, sticky buns have remained long after many other cultural traits have disappeared.

In Venezuela, there is a very similar local version of them called golfeado. The main difference between them is the ground fresh cheese on top that gives the bun a very particular sweet-salty taste.