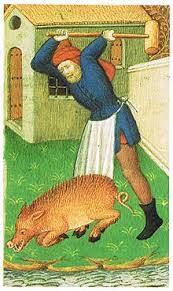 Please meet our next Guest April and read all about her historical romances set in the fourteenth century and in the Regency period.  You will find all her social media links at the end of this post. 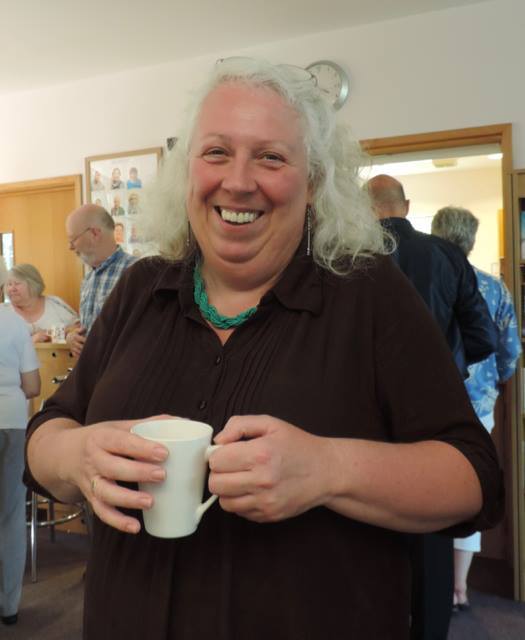 Food can be a very useful device for a novelist who writes about the past, as I do. My novels take place in the fourteenth century and food can tell the reader about the station of the person providing the food, about their wealth and about their opinion of other characters.
If you were served a thin pottage (a soup or a stew depending on the ingredients), you were probably in the house of a villain or freeman (both would be described as peasants today), who worked on the land. If you had a pottage thickened with grain, you were probably in a better-off household. If your pottage contained meat, it might mean that your host was wealthy or that there was some reason for the villain or freeman to have a feast –a pig had been killed, for instance, or it was a special day in the church calendar, or that you’re an important guest.
If you had an animal, it was usually better not to eat it, at least not until it was quite elderly. Chickens were far more valuable for their eggs than they were for their flesh, although some people ate them simply to demonstrate that they could afford to eat them. Cows were kept for milk and sheep for their wool. Pigs, on the other hand, had only one use. They were usually killed in November and some of the meat was salted to be eaten later. Not everything was preserved, however, and most people ate pork in November. The households in a village might stagger the slaughter so that the parts of the animal which could not be preserved were shared with others before they could go off.

Hunting was not just the preserve of the rich. Everyone hunted in order to put some meat on the table. The only difference was in what they hunted. Very few were permitted to hunt deer, and chasing wild boars was only for the very brave. They were dangerous even when they weren’t being hunted. Whilst he might not be able to hunt large animals, a peasant could net birds. Even the flesh of small birds could make the pottage a little tastier.
Fresh fish was fairly plentiful if you lived on the coast or within a day’s journey of it. If you lived further inland you could get salted or smoked fish easily enough. During Lent, when meat was forbidden, this was what people who could afford it ate instead of meat.
Bread was a staple for everyone. Apart from those in the towns, all households made bread, even if they had to take it to the communal oven to be baked. Most houses were far too small for an oven. Even when a house was large enough to have one, the oven would be in a separate building outside. Bread ovens were huge and produced a lot of heat, requiring fuel beyond the means of the poorest. In towns, bread could be bought from bakers. A man could take bread with him to the fields or to wherever he labored to be eaten at midday. At the evening meal a slice of bread, or trencher, would be the plate onto which food was placed to be eaten. The bread would soak up sauces and juices and, if the meal was in a rich man’s house, be given to the poor after the meal.
Not only did what you ate define your social status but where you ate was also important. If you ate in the hall of a lord of the manor, or a noble, or the king, you took your place according to precedence. The hall would contain two or three tables, one of which was shorter and was sometimes raised up on a dais. This was where the lord sat with his family and important guests. Everyone else in the household was arranged on two longer tables with the highest in rank seated at the top of the table on the lord’s right hand. People sat according to their rank, with the lowliest person sitting furthest away from the lord on the left-hand table. That person did not eat the same food as the person at the top of the right-hand table, who did not eat the same as the people on the top table. This seating arrangement was maintained at formal meals in England well into the last century.

After all of this do I have a recipe?
Well, I’ve had a go at making pottage a few times and this is my basic pea pottage recipe.

Soak some marrowfat peas overnight.
Boil water in a large pot.
If you have some animal bones you can include them.
Add the peas, a chopped onion, and some chopped garlic.
Simmer for an hour and add a selection of herbs from the garden.
Simmer for another half an hour.
Serve in a bowl.
If necessary and, if you have them, you can add some grains to thicken the pottage.
Any meat you might have can also be added.

Thank you, Esmé, for allowing me to visit your blog and enthuse about my favorite subject – life in the fourteenth century.